The Brearley School believes that diversity of thought, practice and identity are essential elements in preparing students for principled engagement in the world. We believe in the importance of establishing and strengthening the structures and practices necessary to achieve equitable representation and participation in our school. We are committed to putting these beliefs into action and are therefore engaged in continuous study, self-reflection and dialogue in order to improve and adapt as we learn.

We embrace the opportunities and challenges of learning and working in a diverse environment characterized by respect and consideration for the needs of others. In partnership with faculty, staff, students, families and alumnae, we are endeavoring to instill and sustain shared values that promote a welcoming, inclusive and affirming community.

The Brearley School condemns racism in the strongest possible terms and is committed to building an anti-racist community. This work requires active introspection, self-awareness and the determination to make conscious and consistently equitable choices on a daily basis. We expect our faculty, staff, students, parents andtrusteesto pursue meaningful change through deliberate and measurable actions. These actions include participating in anti-racist trainingand identifying and eliminating policies, practices and beliefs that uphold racial inequality in our community.

When a girl arrives at Brearley, she enters an inclusive community that prizes diversity—what people have in common and how they differ—and recognizes that its students need to feel at home not only in a variety of cultures and ways of approaching and solving problems, but also in the realization that “feeling at home” is a shifting concept.

Brearley today draws families from the entire metropolitan area—all five boroughs, Connecticut, Long Island, Westchester and New Jersey—and from all socioeconomic groups. Both the percentage of students receiving financial assistance and the average grant per student are among the largest in New York City independent schools. The School emphasizes ethnic and cultural diversity as well: students of color make up 50 percent of the student body.
Diversity, and how we think about it, plays an important role in the lives of students and adults throughout the School. Lower School teachers discuss and devise effective approaches to issues of identity in the classroom. Middle School students and their advisors address similar questions as they arise in the burgeoning social world of early adolescence. Interested students can join the Middle School Diversity Committee, which meets weekly with a faculty advisor. The students on the Upper School Diversity Committee also hold weekly meetings, which are open to faculty and staff, and lead regular discussions for the entire division. Among the student clubs in the Upper School are several ethnic and affinity groups that provide support and discuss, celebrate and share their cultures with the whole community. 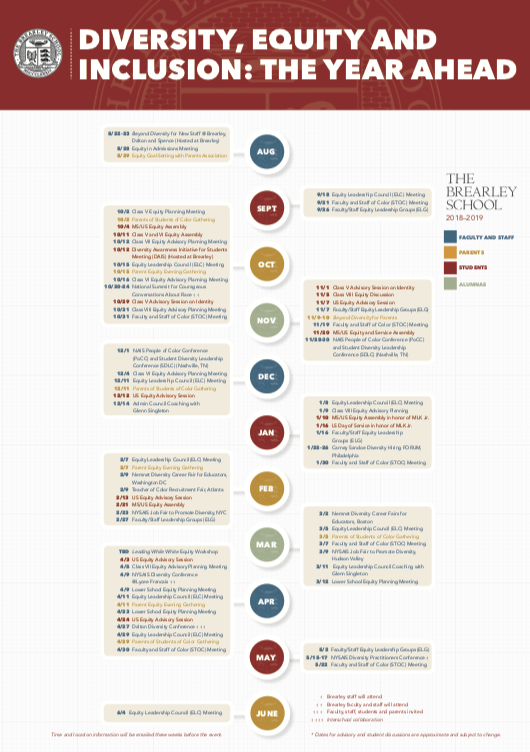 The parents’ diversity forum We Are Brearley meets several times a year and addresses a full range of issues. Its members serve as a resource for parents, as support groups for parents and their children and as co-organizers of the Festival of Cultures, held every other year. Moreover, they seek to bring their concerns to the attention of the School and to advocate for strategies that promote and support diversity.
The opportunities that arise from collaboration among varied perspectives and personalities, different family traditions and multiple talents are at the core of the academic experience as well. Diversity in academic life teaches students how to move between the familiar and the unfamiliar, with an intellectual understanding enriched by formal education.

Broad exposure in the Lower School to cultures around the world is accompanied by an equally important focus on culture within the girls’ own community. The Middle School’s global history curriculum develops students’ facility with the comparative method as they encounter cultures firsthand in their study of French, Spanish or Mandarin. In the Upper School, girls develop the ability to see a culture on its own terms rather than chiefly through comparison with others. Having studied the history of African, Asian, South American and European cultures and a broad range of literature—and with the awareness that there are many learning styles and media for the translation of understanding—Brearley alumnae are prepared for the specific opportunities afforded by living and working with people from backgrounds different from their own. Supported by intellectual tools, academic diversity is not just a virtuous or moral perspective; it is an essential way of seeing the world for global citizens.